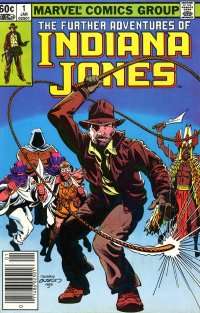 Continuing on the Indiana Jones theme, I also discovered in my old comic book box the first couple issues of “The Further Adventures of Indiana Jones” (larger image). This was back when the Indy characters had the potential to be a serious franchise — there was a Young Indiana Jones on television, you had the comic book, and a whole slew of videogames.

Honestly though, the comic book wasn’t that memorable (apparently like the new movie). In fact, I didn’t even remember that I had these rare, uncommonly rare, extraordinarily rare comic books.

Flipping through the first issue, however, I did find one image that I instantly recalled, as if it had been burnt somewhere in the reptilian part of my brain twenty-five years ago. Oddly enough, it wasn’t in the story itself. Instead, it was the inside of the back cover, a stark black-and-white preview of the next month’s issue: 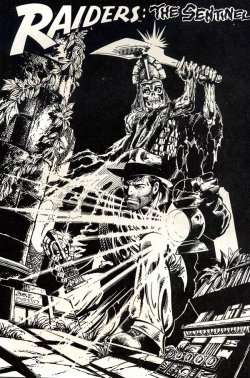 This image actually gives me the creeps (larger image). The low angle looking up emphasizes the skeleton’s towering — but seemingly silent — presence, while Indiana Jones clutches some sort of treasure, the rays of his lantern illuminating but bisecting him, foreshadowing the swing of the sword from the pure darkness behind. Nothing is at a right angle, giving the whole scene an off-kilter tension, doubled by our helplessness, our inability to warn Jones of what we see. This single image, by the celebrated team of John Byrne and Terry Austin, surpasses anything in any of the actual Indiana Jones comic books.

In anticipation of the upcoming Indiana Jones movie, I dug through the old comic book box and came up with this, Marvel’s “Official Comics Adaptation of the Hit Title” — the original Raiders of the Lost Ark in comic book form (larger image).

You’d think this would be worth some money on eBay, but it looks like they’re going for about a buck a pop. So much for another one of my “collector’s item.”