first glance this game just appears to be a normal shooter genre game that was very successful.  In my experience with the game as well as a sizeable part of the fanbase, there were many glitches that could be exploited to amusing effects such as the “super jump” shown here: Halo 2 Super Jump.  Using this and a variety of techniques, a player could work their way “outside of a level.”  This space being defined as going outside of the designed space by developers.  This led to interesting consequences.  When outside of the level, the game stopped acting as a game.  This is where it transformed into a counter game instead of a game.  Transparency was lost.  Instead of being in a continuous virtual world, you could plainly see how different parts of the game were constructed and used to create the illusion of a unified space.  Both gameplay and aestheticism were lost.  Controls often did not function as usual due to invisible walls, disappearing platforms and other events that cannot be explained.  The space was covered with artifacts, buildings and scenery all turned into 2 dimensional flats with no little to no detailing and gaping holes in them.  In this chaotic space, the machine was in almost complete control.  players could die or be shot out of the world in an instant.  This space contains many of the main descriptors of countergaming and thus I see no reason to not consider it a form of countergaming.  The only missing element, although substantial, is purpose.  This however is not essential to be considered countergaming.  In the following image the player is looking outside of a level shown by the gap in the building.  Once in that space, the countergaming begins. 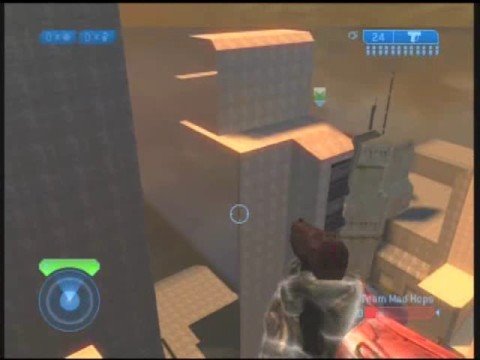 Looking outside a level

3 Responses to Countergaming without Modding